Joey:
Today, is a very exciting day because for the first time, we're all going to get to see the prototype to the aquariums and racks that's going to fill up the entire wall here in the aquarium gallery. However, in order to see them, we need to go somewhere very special.

There's only one way to get where we're going, and that's by helicopter.

Joey:
All, right. Technically, I actually had flight problems at Chicago, so Adam went ahead and sent the chopper to pick me up.

We're here now. It's going to be totally worth it.

Joey:
Today, is an exciting day not only because of what you guys are going to, and as well as myself, going to see the tanks and racks for the first time, but we're coming to Custom Aquariums to see it all get done.

You guys will actually be familiar with Custom Aquariums. I did a video with them a little while back. Actually, it's been a couple of years ago, "You guys do make some really cool tanks. I was looking at this one here"

They've been on my mind ever since with a few of their products, and a lot of things about of them stood out. I thought it would be a great idea to bring you guys along. Finally, we all get to see the racks and tanks together.

That doesn't make a whole lot of sense. You see, we need a little bit of back story here first before we just jump right into this. You see, a couple of months ago when I announced the gallery, maybe a little while longer, Custom Aquariums actually messaged me and said, "Let us know if you need any help". I thought, "You know what? I already decided on the fact that I'm probably going to have to buy these aquariums simply because building them versus buying them cost me the same. Yet building them is going to take me a month and a half or so. That would really put the gallery way behind in time. I thought, "Well, if you want to help, I need a lot of help. I need 10 120 gallon aquariums". They said, "Sure".

This is just going to be a prototype. However, I want to take a close look at it to show you guys everything about it. I'm pretty excited. Adam's going to walk us through this.

Adam, just walk us through the features here. Obviously, this is a prototype. You guys are still binding and tuning it. I had a couple of requests to change a couple little things. This is the first one you built like this, right?

Joey:
This is one of a kind.

Adam:
Yes, the first stacked unit like this. The best feature about it is the fact that you can remove the doors. The doors easily slide no matter how much water you have in the tank. You can easily remove them. Your tank won't buckle.

Adam:
Almost entirely aluminum. We use steel only where we need lots of strength to keep the tanks from buckling.

Joey:
The tanks are 120s. You guys know that. They are four feet long, two feet wide, two foot tall, classic dimensions. This is going to be a modular system. You're going to see five of these. This is just one of them. Then, we'll have them side by side by side. There's a few things and adjustments that need to be made, but clearly, we're going to put a little it more room here first for our scaping and whatnot but with the glass lids.

One of the things that I really enjoyed about is that it's going to suit the gallery really nice based on its color. Very clean looking. The doors come off, all sliding. Very slick looking.

The fact that it's completely covered all the way around ensures that I'm not going to have evaporation or humidity problems in the gallery. Now, you might be concerned with the fish not getting enough oxygen. That's not going to be a problem because we're going to be running sub filtration.

I wasn't really entirely committed to the idea until I came and seen it all. Now, I absolutely have to have it. Let me show you some of the seamless sumps here. This is something that really interested me a lot, is the fact that there are modular system and you can build whatever you want out of them.

You can fill the water up to the top and have completely submerged filtration, or drain it slightly, have an emerge where we would have more of a trickle tower. Then, of course, you have baffles built in. Look at this thing. It's all one solid piece, yet you still get the baffle action. I never realized that.

This is the water can go under and come back up over here. You can have more mechanical filtration, maybe your heaters and then over here. Watch this. [throws] You're not hurting that. That is awesome. Adam, I got to have them. I'm sorry for throwing your stuff around. [laughs] I've got to have it.

Joey:
What's that made out of?

Adam:
High-density polyethylene. Nothing can stick to it. No epoxy. No glue. Nothing. The only way you can stick something to it is spin weld it or have a bulkhead. Which also means LG can't stick to it.

Each, two systems, and I talked about this before, both systems will be plumbed into the same system. However, if I run into problems or I want to make a change, I could always turn the ball valve here and then I will install and make them now separate and give them different returns.

I'm really excited about that because it seems as though there's so many custom options. It's not really a plug and play. I can truly get exactly what I want out of this. That's something that's really been exciting me.

A couple of other interesting facts about these tanks is that the fronts are made out of low iron glass. It's not going to have that green tint on the front. The tanks are made out of 10 millimeters glass, and it also has those braces that I really like. These braces that Custom Aquariums uses really makes them stand out apart.

They're actually completely removable and made out of metal as well. They're extremely durable. Being able to remove these braces is going to make it extremely easy to aquascape and install backgrounds, or whatever else I need to do, and then put the brace back on.

Getting to see the prototype to the aquariums and racks for the first time was pretty exciting, especially getting to make some last minute modifications and request to ensure that we get exactly what we want out of them. However, you're probably wondering when are these going to be done, when are they going to be here. The answer to that is in about 30 days, which is perfect timing because the 2,000 gallon aquarium will be done during that time.

That means we'll be able to dedicate all of our time to those 10 120 gallon tanks, setting them up, plumbing them, getting the filtration running, aquascaping and stacking. I know many of you guys are excited about that just as much as I am. Maybe a little bit more.

However, the excitement doesn't stop there. I need to admit something. The real reason I went to Custom Aquariums was simply because Adam thought it would be a great idea for me to come and check out the prototype, like I did, but also get hands-on with some of the tanks. He knows that I like to build things, clearly. He thought, "Why don't you build some. It could be rewarding for you", et cetera. Whatever the case might be. I thought, "That's a great idea. Yes, I'd love to do that".

However, once I got there and I realized, "I'm inside an aquarium manufacturer's facility for the first time with my camera". Let me take a shot in the dark here. Would you guys be willing for me to be able to film your methods and how you guys build aquariums from start to finish. I knew this was a shot in the dark because aquarium manufacturers do not let this happen. They do not let these things get filmed. They don't want any of their secrets revealed, etcetera.

However, Adam at Custom Aquariums said, "Go for it". This coming Thursday, I will have a video out on how they build their aquariums. I can't begin to tell you how exciting that is and how interesting and educational it will be for you guys. I hope you're looking forward to that.

In the meantime, I need to thank Custom Aquariums for not only making this racking system possible and truly customizing it specifically for my needs, but they could do it for you as well. If you're interested in checking more of their stuff out, I'll leave a link to their website in the description below.

Anyways, I hope you enjoyed today's video. I also like to thank people for watching. If you join me next Thursday, I will have that video ready for you.

About King of DIY

Joey is THE King of DIY, and when he built his gallery of aquariums he chose the Custom Aquariums rack system with 120-gallon tanks...a lot of them!

Joey Mullen is also known as the king of DIY, uarujoey or the DIY fishkeeper on social media. Providing education and inspiration for aquarium enthusiasts on YouTube, he is also the author of The Ultimate DIY Handbook; for the DIY Aquarist. His channel is about educating all levels of fish tank hobbyists who are passionate about caring for fish and keeping an aquarium of their own. Joey's aquarium rack systems were custom made by our professional fish tank engineers, here at Custom Aquariums.

Please watch the King of DIY's videos for some helpful information and great tips on diy aquarium keeping.

Connect with King of DIY 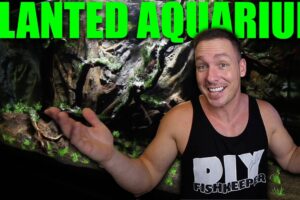 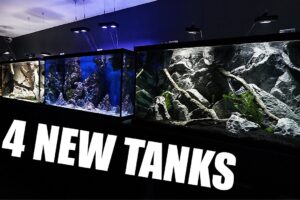 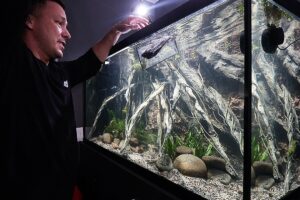 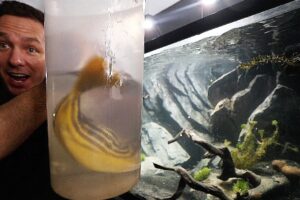 More Videos By King of DIY » View All Vloggers
Have Questions or Need Help?

Talk with one of our aquarium experts now! Just give us a call, or send us a quick message.

Did you forget to type something in the search box? Try again.

This website uses cookies to improve your experience while you navigate through the website. Out of these cookies, the cookies that are categorized as necessary are stored on your browser as they are essential for the working of basic functionalities of the website. We also use third-party cookies that help us analyze and understand how you use this website. These cookies will be stored in your browser only with your consent. You also have the option to opt-out of these cookies. But opting out of some of these cookies may have an effect on your browsing experience.
Necessary Always Enabled
Necessary cookies are absolutely essential for the website to function properly. This category only includes cookies that ensures basic functionalities and security features of the website. These cookies do not store any personal information.
Non-necessary
Any cookies that may not be particularly necessary for the website to function and is used specifically to collect user personal data via analytics, ads, other embedded contents are termed as non-necessary cookies. It is mandatory to procure user consent prior to running these cookies on your website.
SAVE & ACCEPT